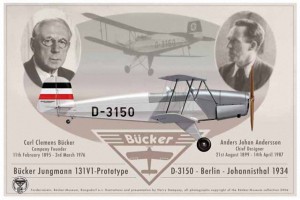 Bücker Bü 131 Jungmann was a German two-seater biplane trainer aerobatic plane. Aircraft designed designer of Swedish origin Andersen J. Anderson was powered inline four-cylinder Hirth engine with an output of 80 to 105 Hp. The first flight was conducted May 27, 1934. It was a very successful model, which became in Germany a trainer aircraft of the Luftwaffe, his business success, however, won abroad. His license was bought Czechoslovakia, Spain, Hungary, Japan, Switzerland and in addition were exported to many other countries.

In Czechoslovakia, acquired the license in 1935, the company Tatra Koprivnice aircraft received designation Tatra T-131. During the occupation by Nazi Germany the production of Tatra, after completion of 35 units completed. In the spring of 1939 transferred to the factory Aero Vodochody.
After the Second World War, it was decided to continue production. Hirth engine has been replaced by domestic four cylinder engine Walter Minor 4-III and the aircraft were identified as Aero C-104. They were made in the years 1946 – 1949 for a total of 260 pieces.
Production Bücker Bü 131 Jungmann license and continues today in the company’s Historical Aircraft Services Karasiewicz in Poland. It was here in 1994, restored according to the original pre-war licensing documentation Tatra T-131.
The aircraft has excellent flight characteristics and belongs at pilots worldwide the absolutely most popular types of historical airplanes. The overall balance of flight characteristics and precise control response earned him a well-deserved nickname “The Stradivarius of Light Aircraft“