he began presale in TicketPro net 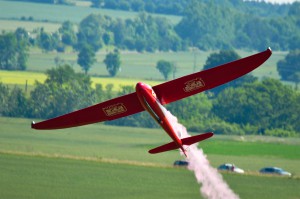 Perhaps all years of Historical airshow Milos Ramert flew. Neither this year would not be that different. Again you see the grace. 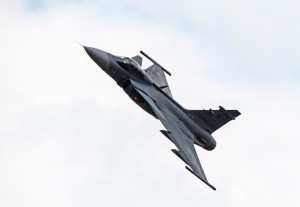 I am pleased to say that this year as well heard out the command of the Army of the Czech Republic, our plea and released for Historical Airshow 2016 Gripen fighters.


Dynamic demonstration of the Gripen can be seen on the video presentation.


OK-KNR
Zlin Z-226MS, serial number 103
This Zlin 226 was manufactured in Otrokovice in spring of 1957. Its aviation life began as Z-226T version and soon received the logical nickname Kanar.
In 1998, Zlin-Avion could do a complete overhaul on it… better said total renovation a rebuilt to a four piston Z-126T. Since the overhaul the plane raced couple of times along the Alps ridges or fine down the sea… Its time came up in 2007, it received new 180 Hp and a metal prop V-503. Even the Kanar’s overhaul took place about 10 years ago, there is hardly anyone passing by without noticing this remarkable plane. The experts on the other hand cannot believe that it can still look so nice. It is simply the machine!

OK-MPR
Zlin Z-226MS, serial number 263
MPR is slightly younger… its roll-out was held in fall 1958. OK-MPR was allocated to Slovácký aeroklubu in Kunovice, where it served until the end of eighties. Sometime in 1969, after the restoration of engine powered division of Kunovice aeroklub the plane received new orange painting. In the early eighties, where it used to tow gliders all the way until its termination and being erased from the registry.
It reached the sky again after many sad years on 23rd of March 2005, being refurbished onto the Z-226MS standard by company Zlin-Avion. The same way as flying in Kanar you can enjoy the power and noise of well-tuned engine and prop that propel the plane at 240 km/h averaging the fuel consumption at 35 l/h.

OK-LPR
Zlin Z-226MS, serial number 020
LPR saw the first light in Otrokovice, 1957, labeled OK-KMX. Its cockpit was also somewhat poorer at the time of its creation, compared to what one can see now. The reason was the birth certificate indicated initially factory designation Z-226 B. Thanks to this the machine was largely dedicated to glider towing. The aircraft register lost plot of OK-KMX in 1991.
In autumn of 2008 the machine again went to company Zlin-Avion and at spring of 2009 left the gates of named OK-LPR and redesigned as Zlin Z-226 MS. Spring sun reflected off the metallic green-red coated surface.

OK-SEN
Zlin Z-326MF, serial number 893
The Zlin Z-326 rolled off the production line under No. 893 in 1963. Finally, June 8, 1965 someone turned up to take 893th into the air. Based on the order of ten Z-326 airframes, a French registration F-BMQR appeared on the fuselage and the airplane begins a career in aviation school of Chartres. More than a quarter of a century later, 893th, this time dismantled into prime factors, returned to his homeland. The 1992 says the record.
Long journey of complete overhaul and conversion and in the end the hangar door leaves blue-yellow beauty bearing the designation Z-326MF. This means that unlike standard 326s that part the air molecules with a wooden propeller, the MF sports glinting metal blades of automatically adjustable 503 mounted on M 137.
From November 15th 1997 the plane faithfully serves the Aviation Club in Zábřeh, also being used for towing.

This monography RADIM VOJTA wrote for you.
Snaps Michal Krechowski

Which WWII fighter is the best? Spitfire, P-51, Messerschmitt Bf-109, Focke-Wulf Fw-190, Zero, Hellcat, Lavochkin 7 or Yakovlev 3? Tons of papers were written and millions of word said with no clear answer, mainly because of different typical mission for each and every airplane. But when talking about low-level airplane for air superiority and dogfighting, Yak-3 will pop up as one of the best.
Yakovlev design bureau designed a lot of very successful fighter planes since the early 40s, which can be divided in two main lines: heavy Yaks (Yak 7 and Yak 9) and light Yaks (Yak 1 and Yak 3). There were no significant differencies in size and weight, however, the main differnce being the usage. Even the construction and silhouettes were so similar that only a real aviation fan can distinguish between them. The most common was the Yak-9 which was used as a heavy fighter, fighter bomber and interceptor.


On the other hand the Yak-3 was concepted as a specialized light low-level air superiority fighter and its design was fully optimised for this goal. It was exceptionally light plane with huge power-to-weight ratio which was able to fight against the latest Messerschmitts and Focke-Wulfs. Yak-3 was praised for its high roll-rate and ability for high-g sustained turn (18,6s for a 360 turn), the best value between all contemporary fighters. It excelled in vertical manouvres and was relatively easy to fly. Its vices comprised mainly of short range and wooden wings, which had a tendency to break-up in flight at high speed and high-g pull-ups.
First operational deployment was at Kursk in 1943 where Yak-3 had its baptism of fire. It reached the front in higher numbers in the spring of 1944 and soon achieved a popularity amongst its pilots and respect from the adversaries. Luftwaffe allegedly forbade their pilots to engage in dogfights with “Yaks with no radiator beneath the nose”, which was one of the main visual differencies between the Yak-3 and its older and bigger brothers. But it must be said that not only the quality of airplane, but growing quality of training of its pilot complemented by declining level of training of German pilots towards the end of the war played main role in gaining the air superiority over the battlefields.
Yak-3 was so good in combat that it was chosen as a main type for French escadrille Normandie-Niemen. French were donated the planes by Russians after the war so they could arrive to Paris in the airplanes they fought in. Thanks to this, one Yak-3 survived in Le Bourget museum to these days.
Yak-3 development continued. New versions were designed towards the end of the war. Some of them had a VK-107 engine of 1600HP mounted instead of VK-105 of 1300HP. Late production airplanes of this higher powered version were all-metal. Unfortunately this version suffered from engine unreliability and overheating and was produced in very small numbers only. In attempt to solve engine problems the radial engine Yak-3U (ASh-82FN of 1850HP) was tested but did not see the production as the war ended. Yak-3U was, however, used as a basis for Yak-11 trainer with less-powerful ASh-21 engine of 700HP. Later on Yak-11 was produced in Czechoslovakia as C-11. This airplane is tied to Mladá Boleslav airfield thanks to well known aerobatic four-ship formation which flew there until late seventies.
As a matter of interest, some Yak-11s/C-11s were later on converted to single seaters with high-performance radial engines to represent original Yak-3U. Some were even converted to V12 engines to resemble the original Yak-3. Often a new Yak-11 parts manufactured in Romania were used.
In addition to this, a production of Yak-3 restarted in Russia in nineties as a joint project of Russians and certain American company. A lot of original parts, jigs and tools were used. Allison V-1710 engine (from P-38, P-39, some P-40s and early P-51s) was used instead of original Klimov VK-105. Allison has similar dimensions, weight and performance, but is more reliable and better available. The story says there was a production hall in Orenburg, Russia, left untouched for forty years since the Yak-3 production came to an abrupt stop when the war ended. A lot of airplanes in various stages of production were there and they were used as a patterns.
Ensuing Yak-3M (M stands for Modernised) were all-metal, Allison powered airplanes with modern instruments, but otherwise were identical to original Yaks. Some parts, for example steel tube fuselage and some systems are original from 1944. On the other hand some parts are modified, most notably propeller spinner and bubble sliding canopy. Around twenty new Yaks were fabricated in 90’s.
Technical Data:
wingspan: 9,20m
length: 8,55m
wing area: 14,7m2
empty weight: 2097kg
max.takeof weight: 2610kg
max take-off power: 1350k
max. diving speed: 600km/h (originally 750km/h)
max level speed at the ground level: 500km/h
cruising speed: 400km/h
max climbing speed: around 20m/s 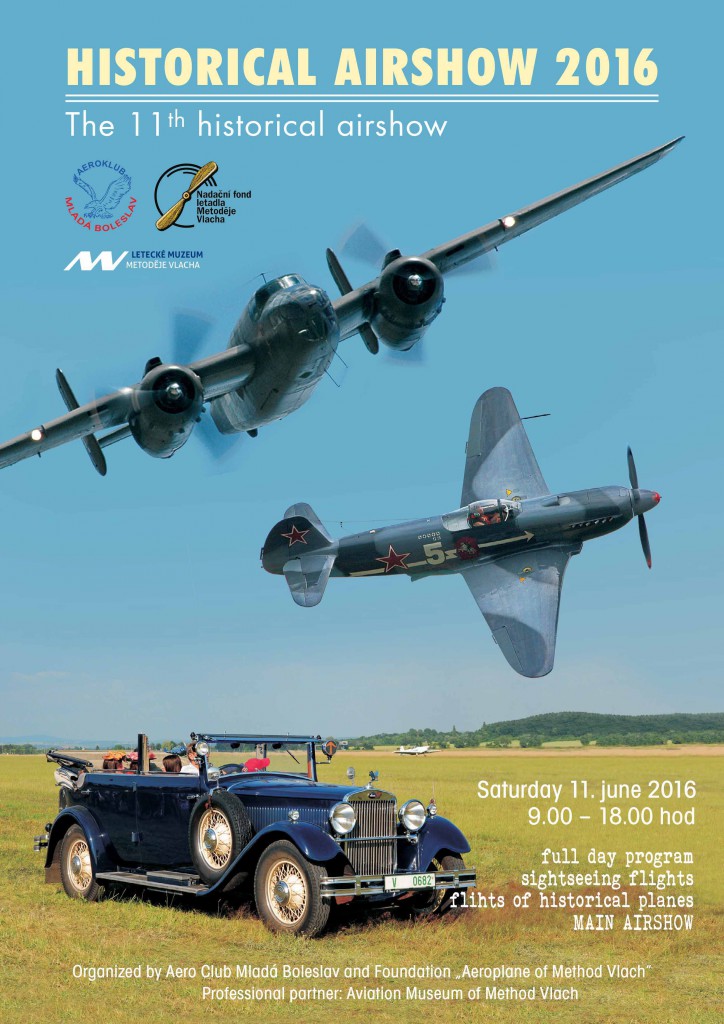 We’re sorry, some small changes probably to come, or times shifts be necessary.

Illustrated book target for the day is not only historical publications with lots of information, facts, dates and names. When scrolling through this book, you will be retold dramatic stories and fates of individual aircraft that participated in the raid on Pardubice. 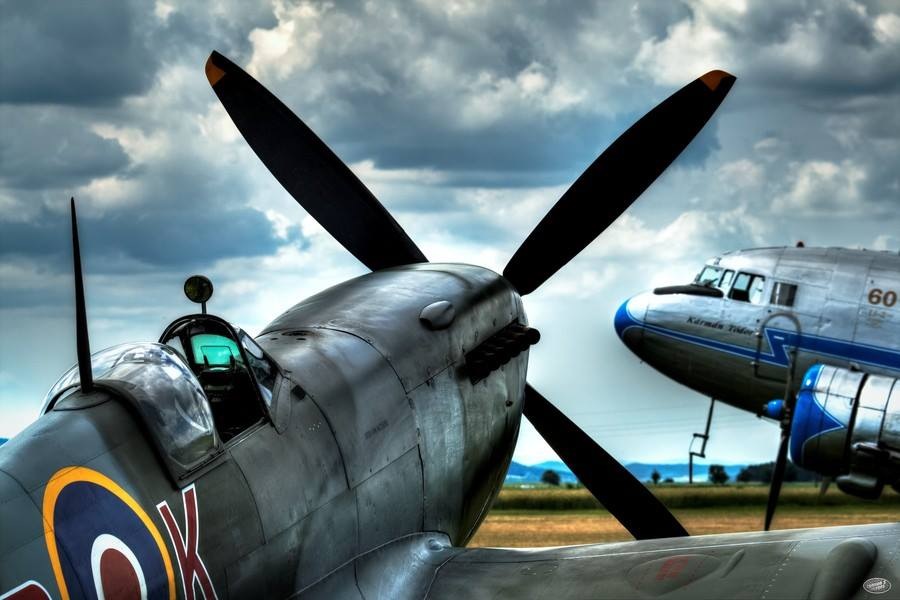 We have just received from the operator Spitfire new photos … It really is something to look forward!!!